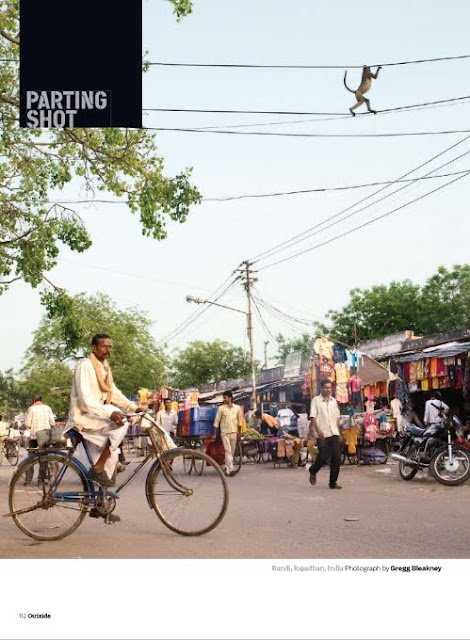 Outside Magazine is featuring a photo from my "Portraits of a Indian Bike Company" collection as their back cover "Parting Shot" in the August 2010 issue. The odd thing about this image is that I never consciously knew that I made it until several days after the fact. You see, just minutes after making the photo, I was drugged (long story) with a triple dose of some sort of hallucinogenic. I spent the next 30 hours on a wild, vivid, and sometimes scary trip under the watchful eye of my guest house owner. A recurring theme during my hallucinations (amongst many other things) were flying monkeys who took pleasure in burning me with motorcycle exhaust pipes--so I simply assumed that the monkey running through air in this photo was only part of my imagination. But a week after recovering from my cranial phantasmagoria, I flipped through my photo edit from that day and realized that this image was made prior to being drugged, that the monkey was entirely real, and finally remembered that I circled back to that location several times that week to try to get this cyclist with "monkey runner" picture.
So there he is on the back page of Outside magazine--a seemingly cute little monkey who was actually the sinister inspiration for an incredibly torturous and searing drug-induced head trip.
Posted by Gregg Bleakney at 7:49 AM