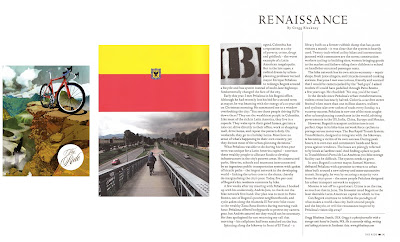 The Ride Journal is a killer new cycling publication based in the UK. It showcases incredible writing and is as equally strong visually w/ work from talented artists, illustrators and photographers from around the globe. I was fortunate enough to be tapped to write a short essay about Bogota's cycling renaissance for this quarter's edition. You can order a copy of the Journal here.
Posted by Gregg Bleakney at 7:12 PM No comments: 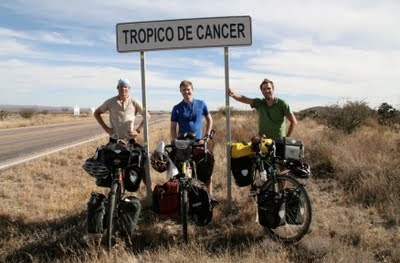 Daveed, Brook and I at the Tropico de Cancer in Mexico

I met Daveed Numero Uno for the first time on the side of the road in Camp Pendleton Military base in SoCal. He had just been robbed at a Jiffy Mart on the base. We were both cycling south through the Americas to Ushuaia, Argentina. I saw Daveed 1 again a few months later in Durango, Mexico (where he was dressed like a clown), then in Chiapas, Mexico (where he had convinced a Univision TV crew to follow him), and finally, nearly a year later in the Atacama desert in Northern Chile (where his front fork snapped in half and he crashed off the roadside).

He's a smart guy and I have a ton of respect for what he did during his cycling trip through the Americas - http://www.rideforclimate.com/

Now, he's been selected as a finalist to be the citizen journalist rep in Copenhagen for the UN Climate Change Conference.

Go here to vote for him

He made a nifty little video about his background here 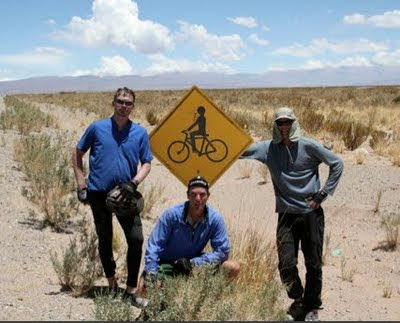 Daveed Uno, Brook and I, in the desert of northern Chile--about a year after the first picture was taken
Posted by Gregg Bleakney at 11:51 AM 2 comments:

If you're like me, you've probably heard the urban rumor that people can surf under the Golden Gate Bridge at Fort Point but have never seen it done. A big swell off the NorCal coast made it possible last week. Some locals were lucky enough to eat Turkey Day leftovers in their PJs and stroll down to the bridge for some evening sessions.


Posted by Gregg Bleakney at 10:09 AM No comments:

Email ThisBlogThis!Share to TwitterShare to FacebookShare to Pinterest
Labels: Photography

My stock archive has been upgraded recently and I've re-keyworded and slickified my bicycle touring photography section. Here's the embed:

Email ThisBlogThis!Share to TwitterShare to FacebookShare to Pinterest
Labels: Cycling, Photography
Newer Posts Older Posts Home
Subscribe to: Posts (Atom)
I'm Not At Home is the Blog of Gregg Bleakney, Creative Director of WhereNext.com, film director, and photojournalist specializing in adventure travel, cycling and conservation. Based in Bogota, Colombia and Seattle, USA.