Totally NOT behind the scenes at Le Tour de France

After witnessing the crazy press hordes, photographers shouting at each other, and tales of friends being elbowed in the face in the finish line pit, I decided that the press pass for the Tour de France that allows "behind the scenes" access wasn't really so "behind the scenes" after all.  Here's a video from the photographer at Bicycling Magazine where Frank Schleck gets knocked off his bike by the crazed "behind the scenes" media who are scrambling to get a shot of the moment he hugs his brother after loosing the time-trial (and the Tour itself).

I like my freedom to roam and since this freedom is effectively restricted in the press area, I decided to scrap my press pass and big cameras to wonder around outside the lines and shoot  2011 Tour de France w/ an iPhone--as a fan/spectator. My goal was to convey what it's like to be a "normal person" without a press pass at the Tour de France.  How close can a fan get to the athletes, what's the vibe, and how fun, wacky, wild is it (fans are much more chill than the media)?

Here's a short gallery photos from the 2011 Tour de France: 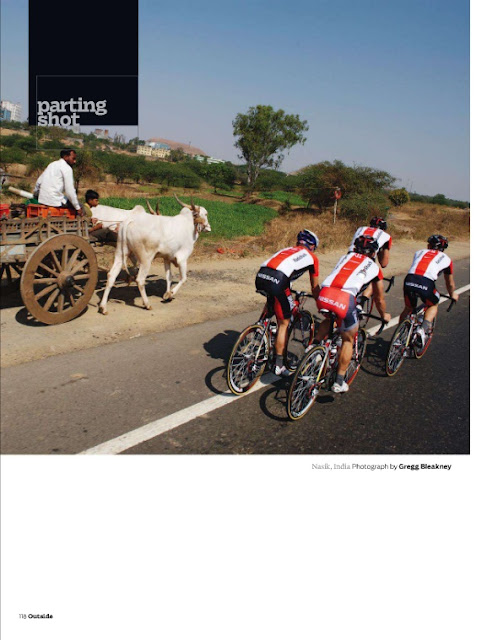 The August 2011 issue of Outside Magazine back cover "Parting Shot" is an image I made of Team RadioShack during their warm-up ride for the Tour de Nasik cyclothon in India.  I'm fascinated by pro-cycling's recent push to expand into new global frontiers and am equally glad that mainstream, non-cycling magazines are willing to publish pictures of the trend.

Posted by Gregg Bleakney at 7:16 AM No comments:

Last summer (while in Switzerland researching trips for the VeloNews Ultimate Ride Guide) I discovered the Swiss National Bike Network and its nine cross-country road bike routes with 82 local and regional trails covering 9,000 kilometers.  I also learned that for an extra $10 (above and beyond my train ticket), SwissRail allows travelers to toss a bike onto any Swiss train.  Wonder-twin-power-activate this rail and trail system, sprinkle some heart-thumping terrain on top, and you get a veritable Disneyworld for DIY cycling junkies.
This summer, with 1-month remaining on my annual 50% off Swiss train pass, $7+ per gallon gas prices, and an assignment to photograph several Tour de Suisse stages, I wanted to see how far I could push the Swiss transportation infrastructure.  Would it be possible to shoot the race using only trains and a bicycle?; i.e. no cars or motos.  To find out, I put this “carbon-free as possible” Tour de Suisse experiment in-motion after the stage 1 prologue in Lugano, where I aimed my bars north to Zurich and fully embraced my roots as a steel frame riding, wool sock wearing, earthy-crunchy Pacific Northwestern cycling photographer.
Rather than follow the race from point to point, I based myself in a small village near Zurich with easy access to a train station and feeder lanes to the Swiss National Bike Network.  From this hub, I could hop a train or pedal to the beginning of stages and either hang at the start or spin ahead on the Tour de Suisse race route until I found a scenic spot to shoot the passing peloton.  Next, I would catch a train to the finish or ride a National Bike Network trail back to Zurich.
In 2010, I somehow overlooked the fact that Switzerland has no open container laws but took full advantage of Heidiland’s public beer drinking tolerance this year by rewarding myself at the end of each day’s photo-shoot with one or more Swiss brewskies.  Prime swilling locations included the grassy slope of stage 7’s 2383 meter Fluelapass and every time I used the rails to get back to my crash pad near Zurich.  In total, I managed 386 kms of cycling with 4630 meters of climbing to cover 4 stages—a far cry from what the racers hammered but much more fun than sitting in a car.
I was never alone on the trains or trails and met meet hundreds of cyclists who were also using this rail/bike combo to follow the race.  South Africans, Germans, Italians, and Swiss, by the end of the race I’d made two-wheeled friends from all over the globe.  It’s truly been a “pinch me this ain’t real” experiment.

Here's some photography from my car-free 2011 Tour de Swiss gig: