I've said it before and I'll say it again, Maktub is my favorite band. Their fan-funded and independent recording model is unique and refreshing in today's world of packaged music.

I took pictures of them as they rehearsed for and played in last year's NYE show in Seattle. You can check em' out on their Web site.

To really get blown away, check out his freestyle music and comedy performance here.
Posted by Gregg Bleakney at 10:30 AM No comments:

I've often boasted to my friends that my iPhone is the coolest gadget I've ever owned. It's even cooler now with my new fav. app called Fring. Now I can use SKYPE on my iPhone and call anyone in the world, from any WiFi connect for nuthin'. Yes, SKYPE finally made it's way to a shoe phone! I should be using it pretty steadily next year while I'm on the road.
Posted by Gregg Bleakney at 6:39 PM No comments:

When I was making pictures for the first time on my Alaska to Argentina bike trip, I started a loose journal of my experience and progress towards meeting my photographic mission. I still do this annual reckoning on my birthday—which was yesterday—so all this is fresh in my cranium right now. I won’t bore you with goal setting stuff, but here's a behind the scenes look at a-year-in-the-life some of my favorite photographic events...and the ride along the way:)

January – My favorite band is Maktub. They let me follow them around for a few days while they rehearsed for their big New Year’s Eve headliner in Seattle. The band members were as cool as the music. 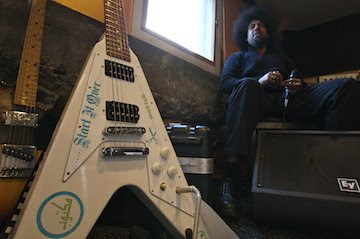 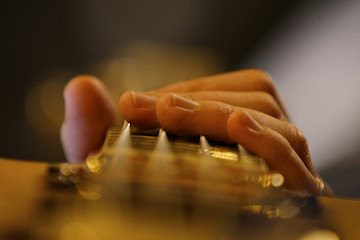 Mid-January – I was invited to the Geographic Magazine’s annual meeting of photographers in D.C. The photographers gather first in Explorer’s Hall for lectures and presentations and then spill out to various bars and house parties to share their work, learn, exchange ideas, and catch-up. It was 100% special to meet all of those amazing people, some of whom are literally working to change the world.

February and March – My trip to Colombia was probably the highlight of my year. 4,000 kilometers by car, boat, bike—the Andes to the Amazon with the ultimate friend and tour guide, Caro. I drank a lot of really good coffee too! I went to Colombia to take pictures of the cycling and adventure scene there. On the third day, I got robbed and lost all of my gear. I decided to use a small digital point-and-shoot back-up camera and stayed for 2 more months, changing my focus from cycling to culture.

My equipment loss turned out to out to be a huge breakthrough for me, as moving light and fast with the simple small camera allowed me to draw less attention and get much more intimate with people. A few pictures from this trip were published in last months Nat. Geographic Adventure Magazine. I saw someone get killed for the first time in my life on this trip—a guy got shot in the head just next to me on a crowded street corner. 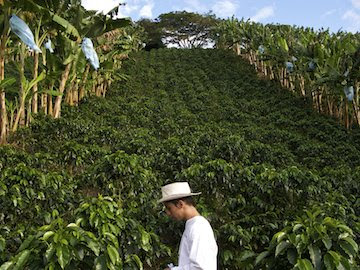 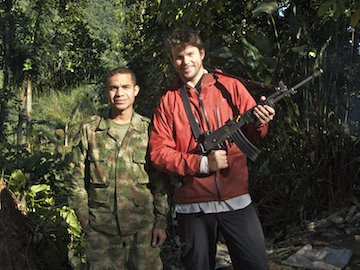 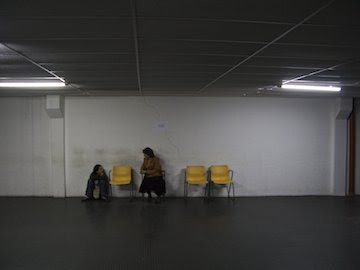 Caro waiting in dingy Bogota police station after I got robbed. There, I filled out a bunch of forms. At the top of one it read, "How were you robbed?" There were three check-box options below: Drugged, Shot, and Other. 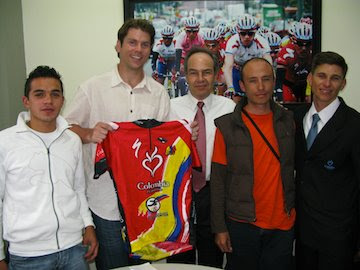 Colombian cyclists, coaches and sponsors. The guy on left won the 2008 world Junior Championships just after this pic.—he's a big deal now...he's also a super-nice guy.
March and April – Rest in Seattle. I took St. Pats day photos for my friend’s Irish bar in the city. It was crazy, I actually found myself telling several women to either stop flashing the camera or do a better job w/ tucking their cleavage in. It felt like spring break Mexico, but colder and in Seattle—substitute Corona for Guinness, Tequila for Jameson. I think that means I'm getting old...the other dudes in the bar didn't seem to mind however. 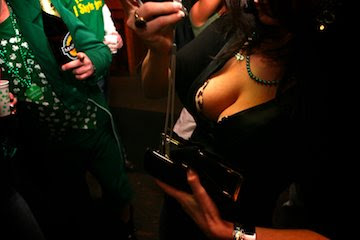 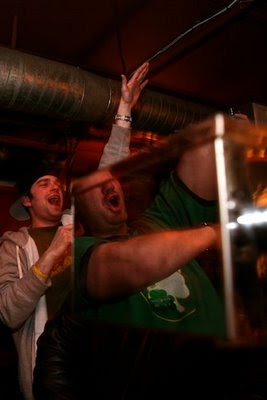 May – I got a scholarship to attend the ILCP Conservation Photography Summit Jackson, Wyoming. Rich Clarkson gave me the scholarship. Some of the world’s top photo-editors and photographers were there. They helped walk me through some project ideas, edit sessions—we also drank beer. Two of my images from my time there were selected for the National Museum of Wildlife Art’s summer exhibit, they were also published in some newspapers. To get there, I bicycled 1,150 miles to Jackson, WY from Seattle. It took 21 days. I stopped at every microbrewery and bird refuge along the way, deeming the trip the “Birds and the Beers Tour.” 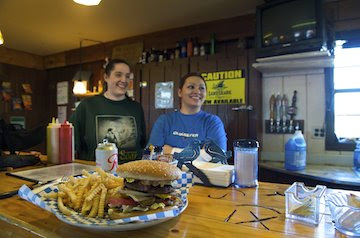 Ranier Beersks and burgers at WA States oldest pub, The Bluebird, in Bickelton 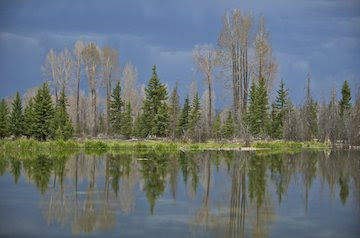 One of my pictures from Wyoming 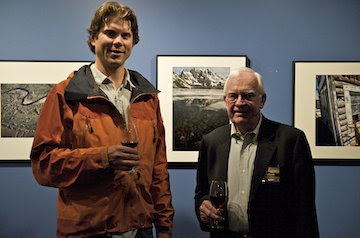 With Rich, one of my pictures from the exhibit in the background
June – The Altitude Adjustment Tour. I bicycled across the Colorado Rockies with Don Thomas and the Dirty Doctor Nords to the Telluride Bluegrass festival. This will be published as short story in an upcoming issue of Adventure Cyclist Magazine. Along the way, I got altitude sickness, started up-chucking and ended up hitching 60 miles on backroads in a truck with some real-life Cheech and Chong drug smugglers. 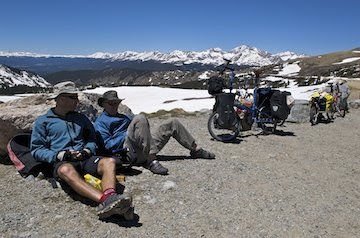 Don and the Dirty Doc Nords on top of Cottonwood Pass
July – I spent time shooting in Olympic National Park with my dear friend Caro from Colombia who was in town for a climbing expedition. On a foggy morning at Shi Shi Beach, I had a once-in-a-lifetime encounter with a Gray Whale. It swam right up to the beach (about 30 feet away from us) scratched its belly on the gravel a few times and then stuck both its head and tail out of the water and slapped them down against the sea like Shamu. I asked a local whale researcher about this and he said that he has never heard of or been part of such an intimate encounter in his entire career.

A few weeks later, I was snapping lame pictures of myself taking my MTB off the back of my car at a campsite. When I checked the preview, I realized that there was a huge bull Elk just behind me. He seemed to be teeing-up to mow me down. Fortunately, before he had time to give me a good gashing, his buddy showed up and they thrashed each other for 30 minutes next to my cooking stove. I dodged in there and turned it off, saving my dinner but nearly getting nixed by an antler along the way. I also taught a few photo workshops for the Quinault Lodge in the Park. 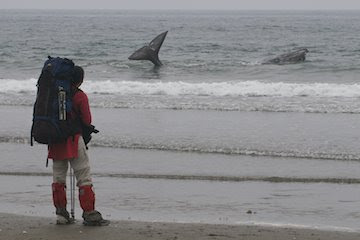 Caro with the Whale 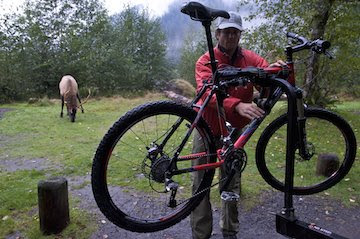 About to get gashed by Elk 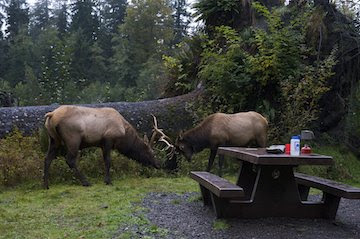 Another Elk distracted the first, sparing me his wrath. Diner cooking safely in foreground.

End of Summer – I hiked a high pass route through the Olympics with my good buddy G Mac and shot a bike tour around Washington for Adventure Cycling’s Tours Catalog and Adventure Cyclist Magazine. The article will come out in 2009. It was fully catered by an exceptional cook. I ate a boatload. From there I went to New York for meetings with magazine photo editors and then shot this really cool tour called Climate Ride. The route was from New York to WA D.C. 120 riders showed up and they raised $400,000 for the fight against climate change. My pictures are running as banners on their homepage...http://www.climateride.org/ 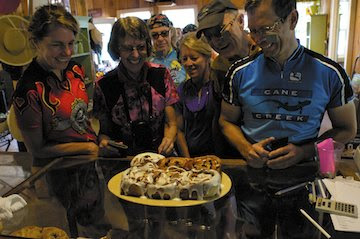 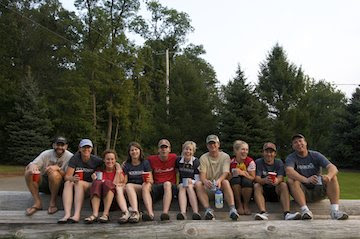 The studly Climate Ride organizers
Fall – My drivers license expired in 2006. Since I don’t own a car, it wasn’t been a big deal but I finally got it renewed. To do this I had to re-establish my residency. I only have eBills so this was a total pain. After I explained my car-free, bill free situation, the lady at the DMV told me to just bring a copy of a car payment stub, car insurance stub or gun owners permit and I’m all set. Hmmmmm. OK. I also had to embarrassingly ask my dad to drive me to the DMV so that I could take my driving test. I made up for the madness with a truly excellent road trip. With my Mountain Bike on the back, I hopped into the "Black Shjeep" and drove 7,500 miles through Washington, Idaho, Montana, Wyoming, Colorado, Utah, New Mexico, Nevada, California, and Oregon, hitting all of the best MTB trails and National Parks along the way. I also met with a ton of magazines, photo editors, clients, friends and started to sort out my 2009 assignment schedule, which could be pretty dreamy!

Don Thomas joined me for 8 days of the trip. I was also gifted the ultimate road-trip album—Strangers Almanac. Can’t believe it took me so long to discover this one. 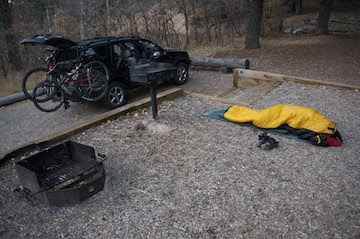 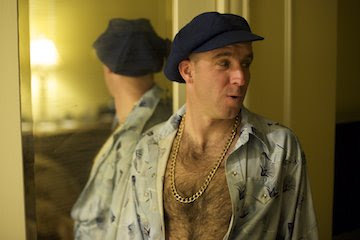 Don Thomas geared up for a big night out in Denver. Yes ladies, the chest hair is real.
Turkey Day – Spent with my fam. at the Quinault Lodge in Olympic National park. I took pictures of Salmon and upset a bunch of Bald Eagles circling overhead who wanted to the eat those Salmon. 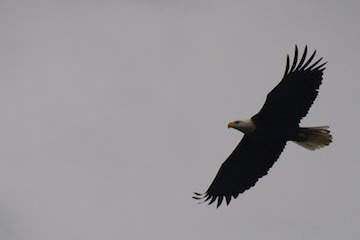 Birthday – Wine, ice Cream, and lots of maps…next year is shaping up to interesting indeed. The wine I'm drinking is from Argentina--if that gives you any hints.
Posted by Gregg Bleakney at 1:49 AM No comments:

The Salmon are running in the Quinault valley in Olympic National Park. I've been out there shooting for the past few days. Salmon are tough to take pictures of--they don't like to hold still. 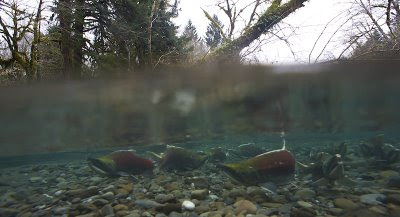 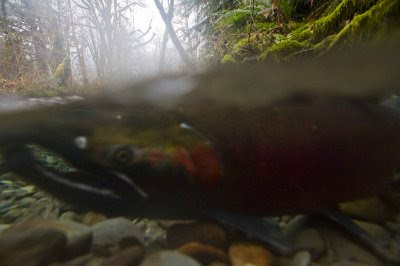 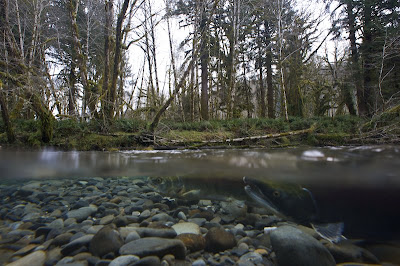 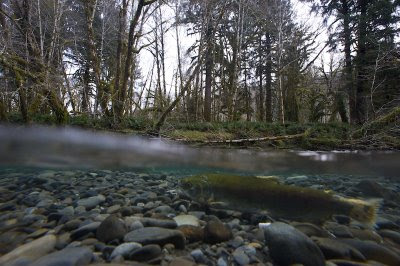 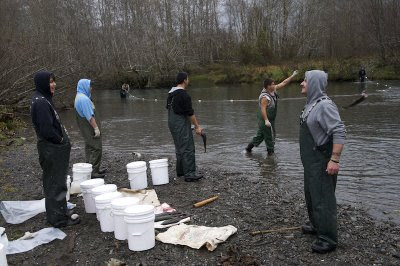 Posted by Gregg Bleakney at 8:39 PM No comments:

Email ThisBlogThis!Share to TwitterShare to FacebookShare to Pinterest
Labels: Photography, Travel
Newer Posts Older Posts Home
Subscribe to: Posts (Atom)
I'm Not At Home is the Blog of Gregg Bleakney, Creative Director of WhereNext.com, film director, and photojournalist specializing in adventure travel, cycling and conservation. Based in Bogota, Colombia and Seattle, USA.