Adventure Cycling just came out with its second annual Top Ten Tours feature. If you're jonesin' to take a killer bicycle tour this summer then you should check the press release out HERE and full article HERE.

My favorite tour is the "Colorado High Country" route...but of course I'm biased because I wrote that one:)

Here's a shot from the trail of that tour with cycling companions Don Thomas and Doc Nords:

Posted by Gregg Bleakney at 10:32 AM No comments:

Nature on the Lost Coast Pictures

Now that I have everything dried out and organized after my boat capsized in the Pacific...I've had a bit more time to sort my shots from the Lost Coast. Here's a sneak peak at some of the nature-ish stuff out there...Tarantulas, snakes, exotic flowers, birds, dolphins, whales, and amazing beaches...this place had it all. (the snakes were too fast for me to get on film).

*You can click on these to get big view*


Posted by Gregg Bleakney at 3:45 PM No comments:

Last month, writer Scott McCredie contacted me about testing some rain gear for cycling. The idea...let's test cycling gear in the rainiest place in the lower 48 at the rainiest time--the Quinault and Hoh rainforests in Olympic National Park. It was a blast--but likely the only time I've been out there when it didn't rain. Here's a sampling of shots:

G
Posted by Gregg Bleakney at 11:12 AM No comments:

Back in the World - and almost on Gilligan's Island

For 2009 I'm pursuing some personal and professional projects in South America. Rather than spend my time and cash flying back and forth from Seattle, I decided to base myself in Colombia and Argentina for the bulk of the year. So back in the world I is once again!
The route south:
For $100 I hopped a flight from Seattle to Miami and hung with pal Steve Gross and gal Dolleen for a few days before hitting Everglades National Park and another $104 dollar flight to Bogota. The $ catch...Delta airlines hosed me with over $200 worth of hidden baggage surcharges on my flight to Miami. From Bogota, I hooked up with my friend Carolina, who is starting an adventure travel company. We took a all-night bus (that didn't make one stop in 9 hours...not even for bathroom breaks) to Medellin and then a crop-duster to the Pacific Coast. From there we caught a boat to a tiny little village on the coast. Carolina was exploring new travel itinerary options in Colombia along this "Lost Coast", we hiked the entire stretch over 3 days.
I must say, the potential in this part of Colombia is truly untapped...think Costa Rica with clutter free beaches, less...or I should say almost ZERO touristas, whale encounters, a largely unexplored National Park, never-ending wildlife, and an Afro-pacific vibe. The small hotel I crashed at in the main port town of Nuqui registered 3 foreigners in the past 3 years...2 Swiss and 1 American--a surfer who evidently broke his board and bailed on the next flight out.
I could write on and on about this place but you should just come down and see for yourself...or better yet, sign up for one of Carolina's tours.
However, as this is a truly raw destination, the trip did have some pretty sketchy and raw moments.
After completing the 3-day coastal hike we decided to source a small fishing boat to return to the Aiport at Nuqui.  To make a long story short. The surf picked up and we were were struck by two huge waves which capsized and sunk the boat. I must now cross another 1 of my 9 vidas off the list. A group of fisherman from shore spotted us and somehow swam out through the surf break to save us and recover the boat. It was a day of mixed emotions but luck and good people prevailed in the end. Much of my gear was trashed. I manage to save my camera equipment and fired off a few shots during the moment (below).
I did lose my beloved iPhone and Patagonia sandals to the sea. Those who know me well will understand this tragic loss of gadgetry and footwear. The good news is that my electric toothbrush vibrated back to life 3 days after the plunge.
Though I still have fun shooting landscapes and adventure stuff, my work focus in Colombia right now is cultural. Above is an embedded gallery of a few images from the rural fisherman and peasants that live along this coastline. I made some of these in black and white, my first time ever...which is kind of strange since I'm colorblind (thank you Nelson for the suggestion which I rejected at first but then reconsidered on the flight down). 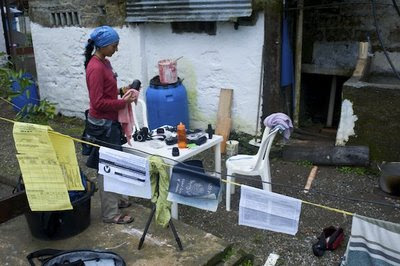 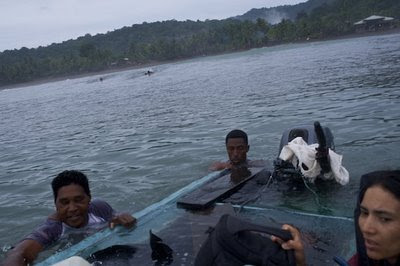 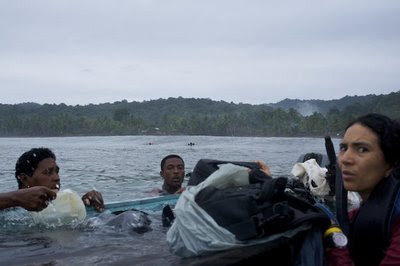 G
Posted by Gregg Bleakney at 9:22 AM No comments: