Link to the Sweet Passes route on GoogleMaps

Over the past two weeks I have cycled a loop around Switzerland and over 14 of its most amazing and historic passes for a total of 55,000 vertical feet of climbing. Along the way, Horst, my Swiss/German cycling guide, and a few others sampled over 30 different desserts (sweets), slept in a bomb shelter, weathered a snow storm, followed in the footsteps of Hannibal and his war elephants, and enjoyed an amazing 10 consecutive days of perfectly sunny weather in the Alps.

Every bike tour needs a "King Climb". The Stelvio, heading east to west from Italy into Switzerland was ours. For the first 14.9 miles we climbed for 6,100 uninterrupted feet via a series of 48 numbered hairpin turns--from a sun-filled apple
valley, to a below freezing, snowy pass it is one of the great climbs of Europe and the Giro de Italia bicycle race.

Here are a few photos of the Stelvio and me chowing down on some Swiss desserts! 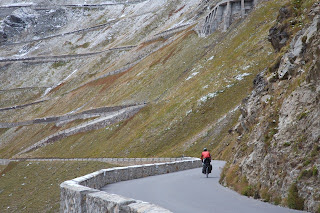 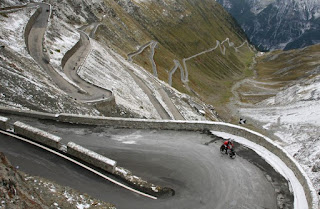 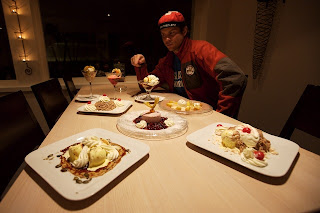 Posted by Gregg Bleakney at 6:40 AM