Getting Fredy to Namibia

The task of the getting Mr. Fredy Mora, the subject of WhereNext Creative's latest short film, Colombia's Lost River of Seven Colors, to the Adventure Travel World Summit in Namibia from the jungle of southern Colombia was perhaps more challenging than making the documentary itself.

When the Adventure Travel Trade Association first proposed that I present a series of short films at the World Summit, I was hesitant to recommend that we bring the subject of the documentary to the Summit as well.  But after meeting Fredy and working with him during our 1.5 days of filming on The River of Seven Colors only two weeks before I was scheduled to fly to Namibia, I just knew he had to be there in-person for the presentation.

Unfortunately, Colombians have one of the worst passports of any country in Latin America.  The idea of getting transit and travel VISAs for a trip to Africa is daunting, even for upper class Colombians--not to mention a young man from the middle of a former war zone who's never left southern Colombia before.  In fact, Fredy was to be the first person ever from his town, La Macarena, to visit the continent of Africa.

When Namibia offered to pick up the tab for his flight from Europe and sponsor his country VISA, I mis-figured that the tough part was over.  All we needed to do now was get him to Frankfurt and find someone to help fund the euro-leg of the trip--right?  The Colombian Ministry of Tourism initially offered to pay for his ticket, but then pulled the plug as they did not have any money left in their 2013 budget to help Fredy out.  To make things worse, we learned that even if we did get him to Frankfurt, the German consulate in Bogota was on holiday and nobody was around to issue his transit VISA (Colombians need a transit visa for certain connections).  We tried routing the itinerary through South Africa but again, no dice on a transit VISA.  At the very last minute, a contact in Bogota offered to walk his paperwork (which now included a stack of letters of recommendation from VIPs from three continents) to the Spanish Consulate in Bogota.  With the promise of the Spaniards issuing a transit VISA we could focus on funding.

In a flurry of Colombian creativity, we were able to trade some money sent by the ATTA to help pay for the fuel costs required for the private planes to make the documentary to a separate espense bucket. Effectively, some very generous Colombian pilots ended up paying for the fuel.  I was then able to help Fredy out with about 40% of the cost of his ticket, the remainder of which he funded on his own to attend the Summit, even though he'd never heard of the Summit before.

Fredy's first leg of the trip was aboard a 4-person aircraft from his home in La Macarena to a town called Villavicencio.  He flew through a heavy storm and said that at some stage "it felt like they were going to crash."  After landing, he transferred to a bus to make the long journey over the Andes to Bogota.  The bus broke down mid-way and Fredy waited for several hours on the side of the road until a replacement bus arrived.  Once he finally got to Bogota, he still didn't have his transit VISA--but the Spaniards did end up releasing it with just hours to spare.

With his transit VISA in-hand, my friend and fixer for this entire project, Hernan Acevedo, put him on the flight to Germany.  With luck, one of Hernan's friends from Germany was also on the flight.  He had a contact at the Frankfurt airport and arranged to help get Fredy from one terminal to the next as he's never left Colombia before and does not speak english.

After 40 hours of travel, Fredy touched down in Namibia and was then transferred to the wrong hotel.  The ATTA delegation from Mexico, who happened to be staying at that hotel, made some calls and arranged for a taxi to take Fredy to the correct hotel.  At that point, the airline called to inform Fredy that his luggage was still in Germany.

Four days later, when Fredy was still without his luggage, wearing borrowed clothing, and standing in front of a massive dune and looking at the ocean for the first time--none of the challenges of his journey seemed to matter.  He was about as stoked as a man can be to living in the moment in Namibia.  In fact, he never complained once about his baggage, or the tribulations of his trip to the Adventure Travel World Summit.

I'd like to say thank you to pilots Hernan Acevedo, Juan Carlos Lenz, and Alvaro Sanchez for organizing the flights to get us to La Macarena.  Angelika Kohler and Natasha Martin for figuring out Fredy's travel logistics.  And Jason Reckers for throwing down his personal credit card for Fredy's flight--even though the was no guarantee that it would happen as he didn't have a transit VISA yet. 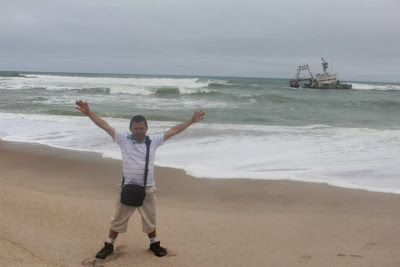 Posted by Gregg Bleakney at 3:58 PM